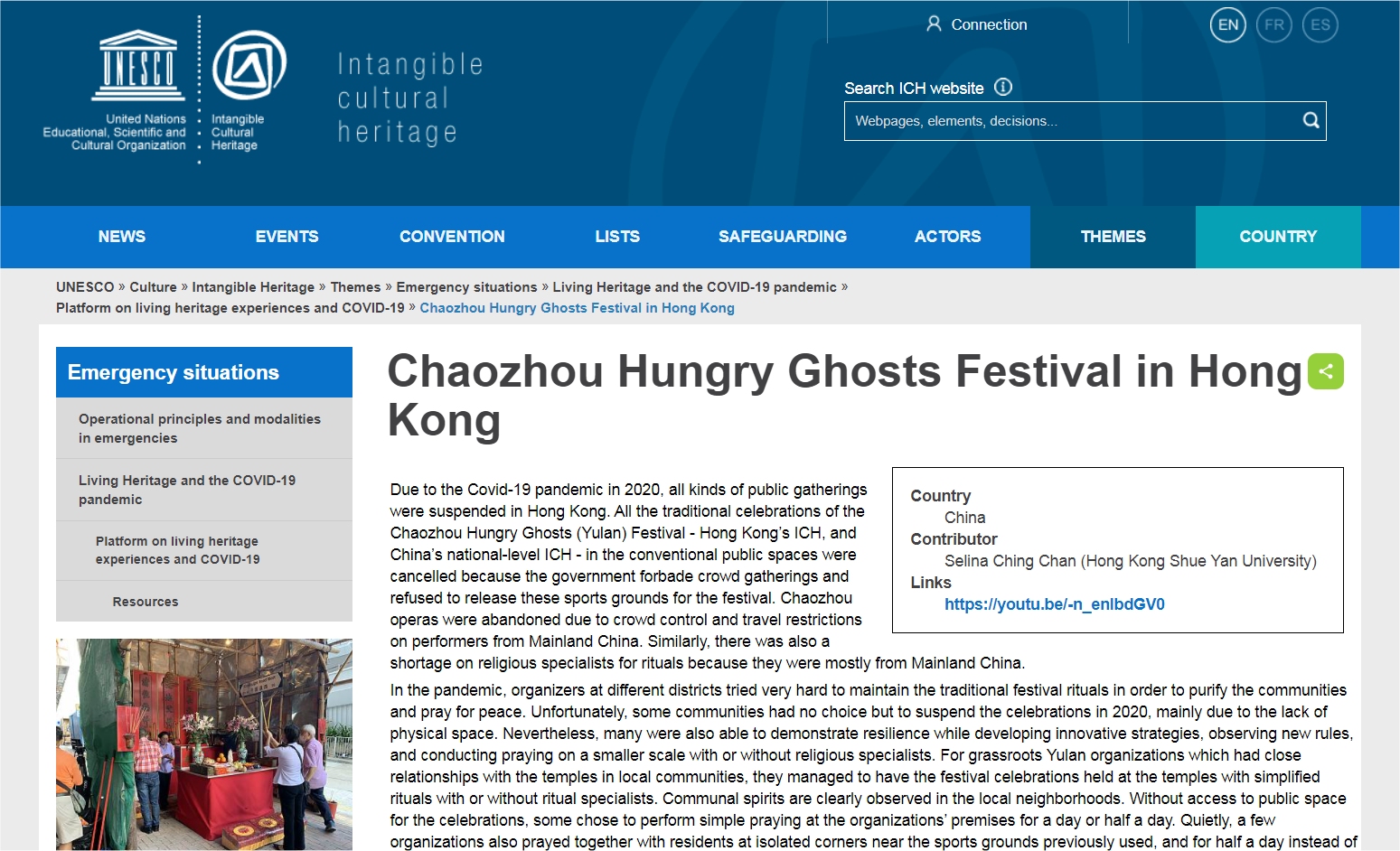 In her article, Professor CHAN reports how the traditional celebrations of the Chaozhou Hungry Ghosts (Yulan) Festival affected by the COVID-19 pandemic, and shows how some Yulan organizations continued to hold the celebration in different scale and in mixed formats.

Due to the Covid-19 pandemic in 2020, all kinds of public gatherings were suspended in Hong Kong. All the traditional celebrations of the Chaozhou Hungry Ghosts (Yulan) Festival – Hong Kong’s ICH, and China’s national-level ICH – in the conventional public spaces were cancelled because the government forbade crowd gatherings and refused to release these sports grounds for the festival. Chaozhou operas were abandoned due to crowd control and travel restrictions on performers from Mainland China. Similarly, there was also a shortage on religious specialists for rituals because they were mostly from Mainland China.

In the pandemic, organizers at different districts tried very hard to maintain the traditional festival rituals in order to purify the communities and pray for peace. Unfortunately, some communities had no choice but to suspend the celebrations in 2020, mainly due to the lack of physical space. Nevertheless, many were also able to demonstrate resilience while developing innovative strategies, observing new rules, and conducting praying on a smaller scale with or without religious specialists. For grassroots Yulan organizations which had close relationships with the temples in local communities, they managed to have the festival celebrations held at the temples with simplified rituals with or without ritual specialists.

Communal spirits are clearly observed in the local neighborhoods. Without access to public space for the celebrations, some chose to perform simple praying at the organizations’ premises for a day or half a day. Quietly, a few organizations also prayed together with residents at isolated corners near the sports grounds previously used, and for half a day instead of 3 days.

Meanwhile, some Yulan organizations which were based in the village communities continued to hold the celebrations at the village, although they were cautious to avoid crowd gatherings. One Yulan organization continued the ritual celebrations of the festival with a small group of ritual specialists for 3 days in temporary sheds which house incense pots representing gods, ghosts, and ancestors as well as huge paper offerings. Nevertheless, processions, banquets, and operas were cancelled to maintain social distancing. One village-based Yulan organization had the praying conducted in the village temple while trimming the ritual celebrations into a half-day event that focused mainly on praying and burning of incense and paper offerings. Traditional fundraising through personal visits to donors was cancelled due to social distancing. Communal spirits continued to be observed in the virtual space, as reflected through donations solicited via different Whatsapps groups. Indeed, digital tools have provided a creative way to conduct fundraising for the first time. Donors could declare their contributions and subsequently depositing the amount into the Yulan Organization’s bank account.

To conclude, the resilience of the Chaozhou Hungry Ghosts Festival as an intangible cultural heritage is observed to continue in creative ways of celebrations during the pandemic. Various ingenious alternatives and digital technologies were solicited by different Yulan organizations according to resources and opportunities available. Communal spirit continues to be observed in the common quest for peace and blessing, especially under the pandemic in the present.