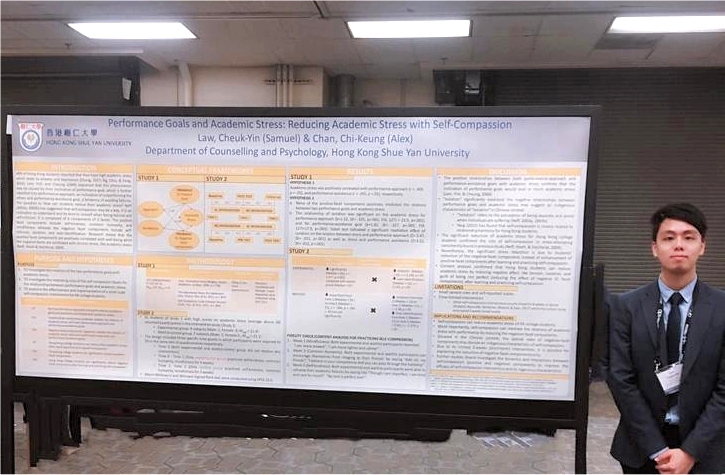 Mr. LAW Cheuk Yin, Samuel, a fourth year student of the Department of Counselling and Psychology in academic year 2018-2019 received the Distinguished Contribution Award of the SSCP Student Poster Competition at the Association for Psychological Science (APS) Convention in May 2019.

The SSCP Student Poster Competition was hosted by the Society for a Science of Clinical Psychology (SSCP) and was an event of the APS’s annual convention 2019, which taken place in Washington, DC, U.S.

In an interview with Shue Yan Newsletter, Samuel said he resolved to challenge himself to join the competition because he wanted to step out of his comfort zone.

“I need to design my poster, present my research with key information, answer questions from the judges, and more challenging, I will attend the convention by myself alone. It is not easy, but I want to push myself out of my comfort zone,” Samuel said.

The paper, “Performance Goals and Academic Stress: Reducing Academic Stress with Self-Compassion”, was his graduation thesis for the Bachelor of Social Sciences with Honours in Psychology programme. The supervisor was Dr. Alex CHAN.

Samuel first surveyed a sample of 137 students and then chose 16 students who had high scores on academic stress for further study.

His main findings was that self-compassion can mediate the relations of academic stress with performance by reducing the self-criticism, isolation and over-identification.

Samuel said the participation of the competition not only allowed him to exchange academic ideas with overseas academics and students, but also broadened his global vision. And in preparing for the competition, he had seek Dr. Alex CHAN and other professors’ comments on his research method and received a lot of valuable insights.

Samuel is currently a research assistant at Hong Kong City University and he plans to pursuit a postgraduate study in the near future.